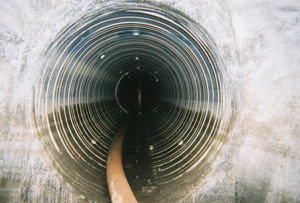 As the pipeline rehabilitation market has grown, more and more technologies have reached the market and jostled for primacy as the rehab solution of choice. Grouting has occasionally been thought of as a more temporary solution, a stop-gap. But recent testing of two 20-year old acrylamide grout rehab projects indicate that grout can certainly stand the test of time.

Located at the foot of the North Shore Mountains, the City of North Vancouver, Canada, is no stranger to groundwater remediation issues, especially with each spring thaw. As a result, city policy dictates that any water line rehabilitation be tested one year following completion. By actively monitoring its water and wastewater conveyance systems, the City can be out in front of any system failures.

Recently, Dave Adams of Superior City Services was contacted by the City to retest several sewer lines that had been rehabbed 20 years ago using acrylamide grout to seal the joints. “They asked me to have a look and wondered how the grout was holding up,” Adams says. “By retesting the lines they could gauge whether to stay on course [with current grout-based rehab projects].”

The test-and-seal grouting was originally performed by MarTech.

Superior City Services utilized a CCTV setup to position a testing packer directly in the pipe joint. The packer inflates on each side of the joint to air test the seal; in this instance, typically an 8-lb test was used. “All of the seals tested really well,” Adams reports. “We tested five or six lines and overall, we saw a 90 percent success rate.”

Adams adds that he has seen other instances of grout-sealed joints that stood up similarly. “We’ve dug up old lines and the grout is still holding firm on the outside of the pipe, keeping its seal,” he says.

With better than 30 years of experience in the industry, Adams understands the capabilities of acrylamide grout very well. “It’s a good product,” he says. “As long as it’s installed properly, it will keep for at least 60 years.” He further explains that it stands up well to anything it will likely encounter in the ground, from water to chemicals and really only suffers in extremely dry conditions.

“If it totally dries out — like in a desert — then it might have issues, but especially up here, we’re not going to have that problem,” Adams says.

The polymer form of acrylamide is used to treat drinking water, as well as in the manufacture of paints, plastic and water absorption products such as diapers. It is a colorless, odorless water soluble solid chemical that can be used as a soil stabilizer, stopping leaks in sewers or as a water-impeding grout in tunnels, dams and other underground construction. Its use as a grout dates back to the 1950s, and has been used in situations ranging from hazardous waste containment to coal mine sandstone shaft sealing.

Acrylamide grout is low-viscosity and is often deployed into situations where other grouts have not had success. Its wide range of gel times, as well as its predictability, stability and non-toxicity make it a popular solution in geotechnical engineering.

Among its few drawbacks are that it will not stretch in a moving crack and will not adhere to concrete surfaces. If exposed to continuous freeze-thaw or wet-dry cycles, there can be some degradation, and a similar effect will occur if the grout is exposed to constant ultra-violet rays. For these reasons, it is best suited to below-grade applications. Studies have indicated that acrylamide grout is not suitable for potable water circumstances. Nevertheless, acrylamide grout’s versatility makes it a good choice for a broad base of applications.

Successes Past and Present

Another testament to acrylamide grout’s longevity can be found just outside of Quebec City in Fossambault sur Le Lac. Faced with an infiltration issue in its otherwise structurally sound sanitary sewer pipes, the City turned to Renovation Aqua and project manager Richard Thibeault to test and seal the sewer lines. Work took place in summer 1986. Each joint was air tested, with failing joints sealed using acrylamide grout.

In fall 2007, the lines were re-tested and examined via CCTV inspection by LCS. The lines remained leak-free. According to Logiball president Marc Anctil, “There are a few joints where you could still see the faded green [dyed] gel in the joint after 21 years.”

Acrylamide has also found success recently in Toronto as part of the tunnel leak remediation program for the Toronto Transit Commission (TTC). Plagued by persistent and progressing water intrusions since their construction in 1954, the tunnels had never received any major restoration. Spot repairs on an as-needed basis kept the tunnels in working condition, but as water intrusion accelerates the usability cycle of key operational components, a solution was sought that might prevent damage rather than simply responding to it.

Launched early in 1997, TTC’s tunnel leak remediation crew was formed after consultation with Klohn Crippen and in cooperation with Avanti International. The leak remediation crew deployed a regular maintenance and upgrade schedule. Working two hours each night (scheduled around train traffic), crews made their way up and down the tunnels, applying acrylamide grout to abate groundwater intrusion.

In the first four years of the program, workers injected 450,000 gal of acrylamide grout at 1- to 1.5-m intervals. Early reviews have been exceedingly positive.

Sealing Its Fate as a Method of Choice

Going back to a rehab project 20 years later allows a reasonable assessment of its success. The long-term effectiveness of acrylamide grout should be encouraging for the TTC as its leak remediation team continues to work on the train tunnels. In the two cases reviewed, acrylamide grout has proven to be anything but a stop-gap. Its success in holding up over time has elevated the overall appeal of grouting as a rehab solution.